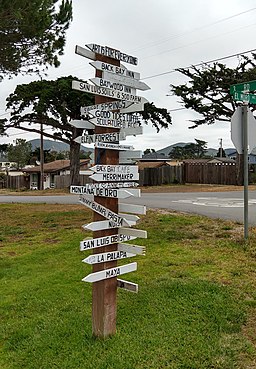 The community of Los Osos/Baywood Park (Valley of the Bears) located on the Southern tidal estuary and four-mile sand strand, just south of Morro Bay, on the coast of Central California. This hidden gem of the Central Coast is just a 20-minute drive from San Luis Obispo along cattle grazing and lush agricultural countryside, and a short three-mile scenic drive from Morro Bay, Visitors can reach the area within a few hours drive from several major metropolitan areas.

With a population of approximately 20,000, the town is situated 148 feet above sea level and enjoys a temperate year-round climate.

Los Osos/Baywood Park offers a full complement of service clubs, organizations and activities, all of which support the quality of life that makes our community unique. There are two elementary schools and one middle school, and a nearby high school in Morro Bay for students to attend. We also have a park, tennis courts, library and community center as well as a local fire station and quality medical care.

We invite you to visit and experience the magic of the “Good Life” that still exists right here in Los Osos/Baywood Park. We invite you to take time to discover our charming community which boasts clean air, friendly neighbors and community pride.

Bears once inhabited this part of California, hence its name: La Canada de Los Osos (the valley of the bears). Now known as Los Osos/Baywood Park, it has a long and colorful history, which was first recorded by Don Gaspar de Portola y de Rovira who formed a sacred land expedition to New California in 1769 that extended from San Blas, Mexico, up to San Diego and on to San Francisco Bay.

Part of Los Osos’ history includes an area now called Sweet Springs Nature Preserve. This two-part natural pond system was once called The Townsite of Sunshine Beach and was founded in 1868. Lesser known, but as profoundly unsuccessful as the 1889 El Moro development, was Sunshine Beach, the pie-shaped property wedged between El Moro and Cuesta-by-the-Sea. A park (the present Sweet Springs Nature Preserve) was included in the plan proposed by Norman Harrison and D. R. Oliver in 1893. The development was never registered and the lots were never filed as separate, legal lots. In 1948 Harold & Orlien Broderson purchased Sweet Springs central and are credited with excavating the ponds for irrigating a potato farm nearby. Today, Sweet Springs is a natural park open to the public and located at the south end of the back bay area of Baywood Park.

The region of Baywood Park was first surveyed in 1889 and was originally slated to be part of a stub narrow gauge rail line routed along the coast. The group hoped that the Southern Pacific Railroad would route its line along the coast, rather than inland, down the Cuesta Grade. A narrow gauge rail line was started in the Chorro Valley with a pass into the Los Osos Valley. The 3,000 lots marked with redwood stakes were optimistically planned to build a second San Francisco, with elegant homes and orderly neighborhoods. A large site for a hotel was left open in the middle. However, a crucial bridge needed to make this a reality was deemed too costly, and the development was abandoned and forgotten by 1894. (Courtesy of San Luis Obispo County, County Surveyor.)

Now a part of Los Osos, it boasts breathtaking views of the back bay, a nature lover’s paradise.